This is chicken jalfrezi in my style.

How to make Chicken Jalfrezi

All Set!… Go enjoy your Chicken Jalfrezi (Ed.) with Roti 🙂 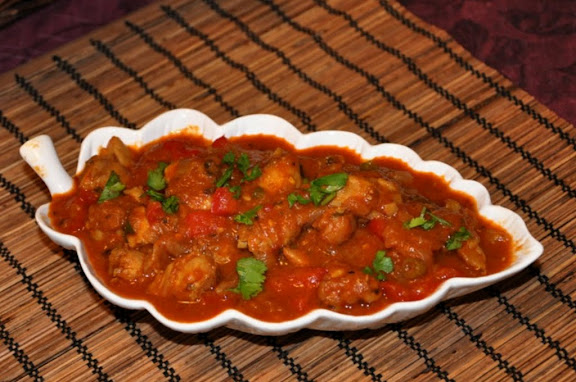 wow it has been a very long time since I logged in or even visited my blog.
This doesn’t mean that this is a coming back blog. I might go away again and disappear for a long time. Who knows!

So many things happened/changed in the last 2 years. My perspective, priorities, likes, dislikes etc…

I still like coffee, food (of course!) and yes I still talk a lot.
I haven’t been to a movie theater in the past 10 months (there is a reason for that)
I don’t like to go for shopping as much as before but the little stinginess that I had before is still staying intact 😀
Working in the same company as I was in 2010.
Made few new friends. Few old ones, whom I considered close, turned out to be not that genuine.

Still married to the same guy and planning to stay with him till death do us part … (cheesy..)

The tag name is Innocent..or Guilty?

RULE 1- You can only say Guilty or Innocent.

RULE 2- You are not allowed to explain anything unless someone messages you and asks!

RULE 3- Copy and paste this into your notes, delete my answers, type in your answers and tag to your friends to answer this.

* Asked someone to marry you? innocent

* Ever kissed someone of the same sex? innocent

* Danced on a table in a bar? innocent

* Ever told a lie? guilty

* Had feelings for someone whom you can’t have back? guilty 😀

* Slept in until 5 PM? innocent

* Been suspended from school? innocent

* Stolen from a store? innocent

* Been fired from a job? innocent

* Done something you regret? guilty

* Laughed until something you were drinking came out your nose? guilty

* Caught a snowflake on your tongue? guilty

* Kissed in the rain?  innocent

* Sat on a roof top? guilty

* Sang in the shower? guilty

* Been pushed into a pool with all your clothes on? innocent

* Had a boxing membership? innocent

* Made a girlfriend cry?  guilty 😦

* Been in a band? innocent

* Still love someone you shouldn’t? innocent

* Liked someone, but will never tell who? guilty

* Been too honest? Guilty

* Regret saying something while you were angry? Guilty

* Ate in a restaurant and got really bloated that you couldn’t walk afterward? guilty 😀

* Wanted to change yourself for someone else? Guilty

* Been told that you’re handsome or beautiful by someone who totally meant what they said? Guilty

* Had communication with your ex? meh… not really… innocent..

* Got totally drunk on the night before exam? innocent

* Got totally angry that you cried so hard? Guilty

meh… not that interesting :P… I gotto to do some wild stuff :P…

well I tag  Priya, Anu, Vimmu, Sujatha & all others who want to take this tag…  🙂

I’ve enjoyed sooo much in the past 2 months :).. We were planning for an India Trip in August. So once my contract (job) was finished, I didnt bother looking for a new one. I decided I will look for one once I get back from India. So I had no stress or tension thinking about the “unemployment” phase. I sat around, watched tv, stupid sitcoms, movies, read books, cooking experiments,visited my family in east coast, shopping && soooo many more stuff..

Then here comes the best part… 1 month in Kerala… god’s ownnnnnn country :)… I cant explain how much we loved our stay.  One month went sooo fastttttt :(.  First week, we took a 1 week road trip w/ my inlaws. The main aim was a theerthadanam ( basically a food”adanam”). The taste of kottayam fish curry, kozhikodu biriyani… hmm I dont think I will ever like my cooking again :D…

For those who love beaches, but dont like to go crazy if people are around : try the private beaches in Kovalam. Somatheeram, Thapovan, Coconut Bay Beach Resort etc etc,… there are sooo many of them.

After  looooooong 9 yrs, I got to spend Onam in Kerala. Eventhough, my amma made a big sadya every year & we went to all the onam celebs in US, it can’t be compared with the Onam in Kerala. I think its the feeling of being around w/ the family.. not just parents… but the whole big extended family… I just love that … 🙂 & ofcoz the sadhya w/ adapradhaman, paalada etc.

Few days before the trip, I had a small tension coz this was the first & longest time I was going to stay w/ my inlaws since wedding….. It was totally a great experience… I never knew inlaws could spoil you more than your own parents… and I experienced that….  and hats off to them for dealing with me :D… lol …  & on the way back we got free upgrade to business class 🙂 🙂 🙂 … So, overall it was a greaaaaat trip. It’s been more than  a week since we got back and I’m still talking about the trip lol..