Only 2 more weeks for this year to end. I can’t beleive it’s over. I feel like last year xmas was like a month back or something.

I’m getting a little worried/scared on the side thinking about time. It never used to scare me and I always used to welcome every year with so much joy. For some reason I dont want this year to end. This year was not so special or important that I dont want it to end but still why am I feeling this way. I just can’t figure out why I’m little agitated. Is it because I’m getting old or is it because of the mere “thought” of responsibilities that might come on my way in the coming year/(s) or is it because of something else ???

I feel that there is some unfinished business left for me in this year. I don’t think I will be able to fix it in the next 2 weeks but hopefully it will be better next year. Actually this year was also good… not as much as last year… but still it was very good and I’m pretty sure it was better than most of the people in the world. Therefore, I don’t want to complain. If something went wrong this year then it was just because of my stupid mind and me. I felt little alienated even though I was around people most of the time. Isn’t it funny ‘coz you are not alone most the time but still you feel lonely at times.
Sometimes I wonder why people think too much about themselves & people around them. I have heard that few ppl can blank out their mind and be in that state. I wish if I could do that at times. I hate when there is a rush of thoughts especially with a lota ???????? for which I don’t have any answers. Is it just me??? lol I hope not :D…

I wrote another whole paragraph & just deleted it… I always wanted this to be a private blog so I could just write any gibberish I want to and not care about it. But I guess along the way I revealed my identity :P… no big deal… but still I have to watch my words… Its raining here… and I love watching it… it kinda calms me :)… so winding up w/ my crazy thoughts for now … 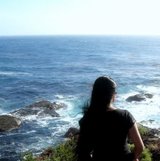